In case you are not familiar with Diana Nyad, she is most well know for her epic swim from Cuba to the Florida Keys in 2013. After reading her book about her life and her surreal journey, she was quickly elevated to hero status in my mind. What an incredible story of determination, strength and courage.

Diana Nyad describes growing up in a physically and sexually abusive family with heartbreaking descriptions of childhood traumas. She is quick to add that she did not and does not want that to define her. She refused to be a victim and was always challenged to Find a Way.

She realized at a young age that she was destined to be a competitive long distance swimmer. In her twenties, she set a world record for swimming around Manhattan Island. This accomplishment brought her notoriety which encouraged her to try to swim from Cuba to Florida. She was forced to call it off after 42 hours and then took almost 30 years off of competitive swimming.

Diana realized that she wouldn’t be satisfied until she found a way to accomplish her life long dream to swim from Cuba to Florida. In her 60’s then, she set out to Find A Way to achieve her life long pursuit. I was blown away by  how much planning and logistics goes into something this complex. One does not simply jump in and swim.

Aside from the political permits required, the weather obviously plays a major role in a swim like this. Diana had a team of  navigators and meteorologists working to make sure she had the best possible conditions. Experts on nutrition and hydration were needed  feeding schedules devised. Diana was required to eat and drink while in the water without holding onto the boats accompanying her.

Kayakers and shark divers were required to be in the water with her. It was very important to her to swim without a shark cage so the divers and kayakers were on the look out constantly to keep them away. She describes horrifying stings by jellyfish that rendered her temporarily paralyzed and sent her into anaphylactic shock. She was forced to abandon her swim due to the jellyfish the first time.

After 4 failed attempts, Diana Nyad was more determined than ever to find a way to reach her goal. She goes into detail about all the preparations and teams of people needed to achieve her swim. She stresses many times that this was a team effort. I have to admit I got a little teary reading the details of the final swim in which she made the 110 mile 52 hour swim from Cuba to Key West. I found myself rooting for her to swim on! It was quite amazing to learn all the details.

I loved reading about her determination, strength and grit as she fought through challenges I can not even imagine. I thought I was an endurance athlete until I read about her training.  This woman is a true wonder woman! Find interviews with her here.

If you’d like to check out the book, you can find it on Amazon.

Next month’s book club pick is How Bad Do You Want It? (affiliate link)

Join in! Thanks Wendy for hosting! 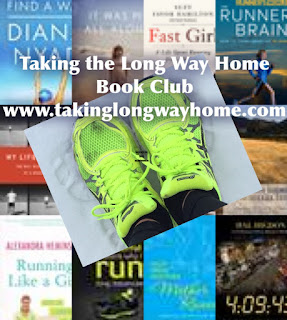 Can you even imagine swimming 110 miles and 52 hours?

Also linked up with Nicole

Hi I'm Deborah! I spend my days successfully raising a husband & 2 teens in the VA/DC area. I am a lover of all things running & fitness. As a life long vegetarian, I've always been passionate about healthy living & exercise. Looking for partners in crime, I started my own chapter of Moms Run This Town (MRTT) which has grown to over 700 members. I've met so many amazing women who inspire me daily to keep moving forward. You can usually find me running with my crew and training for the next crazy adventure they talked me into. I love to keep up to date on new running & fitness trends. I definitely choose my running gear based on color and love to express my fashion sense while exercising.

Get the latest recipes right to your inbox:

Previous Post: « FOMO -it’s real very real
Next Post: Vegetarian Breakfast Lasagna You Will Jump Out Of Bed For »

Successfully raising a husband & 2 young adults in the VA/DC area. I am a lover of all things running & fitness. As a lifelong vegetarian/pescatarian I’ve always been passionate about healthy living & exercise. Looking for partners in crime, I started my own chapter of Moms Run This Town (MRTT) which has grown to over 800 members. I’ve met so many amazing women who inspire me daily to keep moving forward. You can usually find me running with my crew and training for the next crazy adventure they talked me into.
Read More…

Keep updated on my blog and site news: